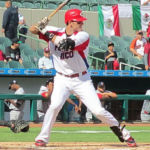 Why Is Aaron Bates Influential?

According to Wikipedia, Aaron Bates is an American retired professional baseball first baseman. He played in Major League Baseball for the Boston Red Sox in 2009. He is currently the assistant hitting coach for the Los Angeles Dodgers.

Other Resources About Aaron Bates

What Schools Are Affiliated With Aaron Bates?

Aaron Bates is affiliated with the following schools: