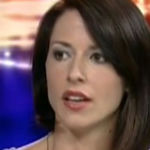 Why Is Abby Martin Influential?

According to Wikipedia, Abigail Suzanne Martin is an American journalist, TV presenter, and activist. She helped found the citizen journalism website Media Roots and serves on the board of directors for the Media Freedom Foundation which manages Project Censored. Martin appeared in the documentary film Project Censored The Movie: Ending the Reign of Junk Food News , and co-directed 99%: The Occupy Wall Street Collaborative Film .

Other Resources About Abby Martin

What Schools Are Affiliated With Abby Martin?

Abby Martin is affiliated with the following schools: