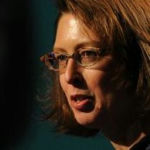 Why Is Abigail Johnson Influential?

According to Wikipedia, Abigail Pierrepont Johnson is an American billionaire businesswoman, and the granddaughter of the late Edward C. Johnson II; the founder of Fidelity Investments. Since 2014, Johnson has been president and chief executive officer of American investment firm Fidelity Investments , and chair of its international former sister company Fidelity International . Fidelity was founded by her grandfather Edward C. Johnson II. Her father, Edward C. "Ned" Johnson III, remained chair emeritus of FMR until his death in March 2022. As of March 2013, the Johnson family owned a 49% stake in the privately-held company, with Johnson herself holding an estimated 24.5%.

Other Resources About Abigail Johnson

What Schools Are Affiliated With Abigail Johnson?

Abigail Johnson is affiliated with the following schools: