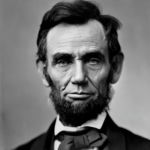 Why Is Abraham Lincoln Influential?

According to Wikipedia, Abraham Lincoln was an American lawyer and statesman who served as the 16th president of the United States from 1861 until his assassination in 1865. Lincoln led the nation through the American Civil War and succeeded in preserving the Union, abolishing slavery, bolstering the federal government, and modernizing the U.S. economy.

Other Resources About Abraham Lincoln

What Are Abraham Lincoln's Academic Contributions?

Abraham Lincoln has made the following academic contributions: