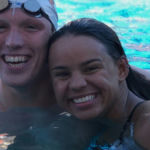 Why Is Abrahm DeVine Influential?

According to Wikipedia, Abrahm David DeVine is an American swimmer from Seattle, Washington. He currently represents the LA Current which is part of the International Swimming League. His first international competition was in the men's 200 metre Individual Medley event at the 2017 World Aquatics Championships held in Budapest, Hungary. In 2017, as a member of the U.S. FINA World Championships team he finished tenth in the 200 IM. In his junior season at Stanford he became a National Collegiate Athletic Association champion in the 400 IM, he was named the Pac-12 Conference Swimmer of the Year. In 2018, DeVine placed second in the 200 IM at U.S. Summer Nationals, which qualified him for the Pan Pacific Swimming Championships In Tokyo, Japan where he finished fifth.

Other Resources About Abrahm DeVine

What Schools Are Affiliated With Abrahm DeVine?

Abrahm DeVine is affiliated with the following schools: