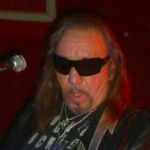 Why Is Ace Frehley Influential?

According to Wikipedia, Paul Daniel "Ace" Frehley is an American musician, best known as the original lead guitarist and co-founding member of the hard rock band Kiss. He invented the persona of The Spaceman and played with the group from its inception in 1973 until his departure in 1982. After leaving Kiss, Frehley embarked on a solo career, which was put on hold when he rejoined Kiss in 1996 for a highly successful reunion tour.

Other Resources About Ace Frehley

What Are Ace Frehley's Academic Contributions?

Ace Frehley has made the following academic contributions: