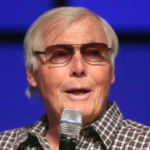 Why Is Adam West Influential?

According to Wikipedia, William West Anderson , known professionally as Adam West, was an American actor. He portrayed Batman in the 1960s ABC series of the same name and its 1966 theatrical feature film, reprising the role in other films and television shows until his retirement from live-action appearances. West began acting in films in the 1950s. He played opposite Chuck Connors in Geronimo and The Three Stooges in The Outlaws Is Coming . He also appeared in the science fiction film Robinson Crusoe on Mars and performed voice work on The Fairly OddParents , The Simpsons , and Family Guy , playing fictional versions of himself in all three.

Other Resources About Adam West

What Schools Are Affiliated With Adam West?

Adam West is affiliated with the following schools: