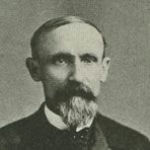 Why Is Addison S. McClure Influential?

According to Wikipedia, Addison Smith McClure was an American lawyer and politician who served two non-consecutive terms as a U.S. Representative from Ohio in the late 19th century. Biography Born in Wooster, Ohio, McClure pursued an academic course in Jefferson College, Canonsburg, Pennsylvania . He studied law in the office of Martin Welker, was admitted to the bar in 1861, thereafter practicing in Wooster. He entered the Army as a private in April 1861. He was elected captain of Company H, Sixteenth Regiment, Ohio Volunteer Infantry, in October of the same year. He was captured December 29, 1862, during the Vicksburg Campaign, and held as a prisoner of war until he was exchanged in May 1863. He was discharged in August 1864.

Other Resources About Addison S. McClure

What Schools Are Affiliated With Addison S. McClure?

Addison S. McClure is affiliated with the following schools: