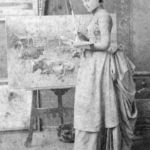 Why Is Adelia Armstrong Lutz Influential?

According to Wikipedia, Adelia Armstrong Lutz was an American artist active in the late nineteenth and early twentieth centuries. She organized art circles in Knoxville, Tennessee, as director of the Knoxville Art Club and as a co-organizer of the Nicholson Art League. Her still lifes and portraits were exhibited throughout the American South, and they are to be the subject of a permanent exhibit at her former home, Historic Westwood.

Other Resources About Adelia Armstrong Lutz

What Schools Are Affiliated With Adelia Armstrong Lutz?

Adelia Armstrong Lutz is affiliated with the following schools: