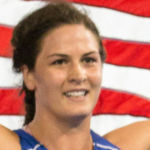 Why Is Adeline Gray Influential?

According to Wikipedia, Adeline Maria Gray is an American freestyle wrestler who currently competes at 76 kilograms. She is a six-time world champion and a two-time Olympian , with the silver medal in her event at the 2020 Summer Olympics. She is the first American woman to win back-to-back wrestling world titles since Tricia Saunders in 1998 and 1999. She is also the first American wrestler to win six world championships.

Other Resources About Adeline Gray

What Schools Are Affiliated With Adeline Gray?

Adeline Gray is affiliated with the following schools: