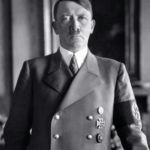 Why Is Adolf Hitler Influential?

According to Wikipedia, Adolf Hitler was an Austrian-born German politician who was the dictator of Germany from 1933 until his death in 1945. He rose to power as the leader of the Nazi Party, becoming the chancellor in 1933 and then assuming the title of in 1934. During his dictatorship, he initiated World War II in Europe by invading Poland on 1 September 1939. He was closely involved in military operations throughout the war and was central to the perpetration of the Holocaust, the genocide of about six million Jews and millions of other victims.

Other Resources About Adolf Hitler

What Are Adolf Hitler's Academic Contributions?

Adolf Hitler has made the following academic contributions: