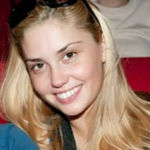 Why Is Agata Muceniece Influential?

According to Wikipedia, Agata Edgarovna Muceniece is a Latvian-born Russian actress and model, and television presenter. Life and career Muceniece studied at the University of Latvia with a degree in Chinese philology. She then studied at the Russian State Film Institute in Moscow, Russia. She has become popular in the television series "Closed School". She has also featured in projects such as "Secret City", "Kvest", "Three Musketeers".

Other Resources About Agata Muceniece

What Schools Are Affiliated With Agata Muceniece?

Agata Muceniece is affiliated with the following schools: