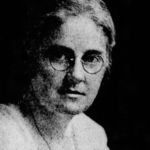 Why Is Agnes Ballard Influential?

According to Wikipedia, Agnes Ballard was an American architect and educator. She was the first female registered architect in Florida, the sixth woman admitted to the American Institute of Architects and the first from Florida. As an educator, she taught geography, biology, chemistry, Latin and mathematics in West Palm Beach, Florida. Ballard was also one of the first women to be elected to a public office in Florida, serving as Superintendent of Public Education for Palm Beach County, Florida for four years.

Other Resources About Agnes Ballard

What Schools Are Affiliated With Agnes Ballard?

Agnes Ballard is affiliated with the following schools: