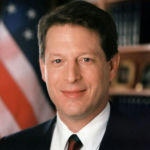 Why Is Al Gore Influential?

According to Wikipedia, Albert Arnold Gore Jr. is an American politician and environmentalist who served as the 45th vice president of the United States from 1993 to 2001 under president Bill Clinton. Gore was the Democratic nominee for the 2000 presidential election, losing to George W. Bush in a very close race after a Florida recount.

Other Resources About Al Gore

What Schools Are Affiliated With Al Gore?

Al Gore is affiliated with the following schools:

What Are Al Gore's Academic Contributions?

Al Gore has made the following academic contributions: