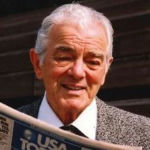 Why Is Al Neuharth Influential?

According to Wikipedia, Allen Harold "Al" Neuharth was an American businessman, author, and columnist born in Eureka, South Dakota. He was the founder of USA Today, The Freedom Forum, and its Newseum. Early life Al Neuharth was born in Eureka, South Dakota, to a German-speaking family. Neuharth's parents were Daniel J. and Christina, who married on January 11, 1922. Daniel died when Al was two. Al needed to help his family survive the Great Depression. He worked on his grandfather's farm. As a youngster, he also delivered the Minneapolis Tribune but he gave that up for a better paying job in the meat industry, sweeping up in the meat plants and slaughtering animals. Neuharth graduated from Alpena High School in Alpena, South Dakota, where he worked for Allen Brigham, owner of the local newspaper, the Alpena Journal. At the age of 19, Neuharth served in the Army during World War II. As a member of the 86th Infantry Division, Neuharth was deployed to France, Germany, and the Philippines.

Other Resources About Al Neuharth

What Schools Are Affiliated With Al Neuharth?

Al Neuharth is affiliated with the following schools: