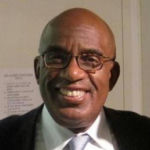 Why Is Al Roker Influential?

According to Wikipedia, Albert Lincoln Roker Jr. is an American weather presenter, journalist, television personality, and author. He is the current weather anchor on NBC's Today, and occasionally co-hosts 3rd Hour Today. He has an inactive American Meteorological Society Television Seal #238.

Other Resources About Al Roker

What Schools Are Affiliated With Al Roker?

Al Roker is affiliated with the following schools:

What Are Al Roker's Academic Contributions?

Al Roker has made the following academic contributions: