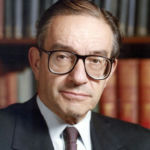 13th Chairman of the Federal Reserve in the United States

Why Is Alan Greenspan Influential?

According to Wikipedia, Alan Greenspan is an American economist who served five terms as the 13th chair of the Federal Reserve in the United States from 1987 to 2006. He works as a private adviser and provides consulting for firms through his company, Greenspan Associates LLC. First appointed Federal Reserve chairman by President Ronald Reagan in August 1987, he was reappointed at successive four-year intervals until retiring on January 31, 2006, after the second-longest tenure in the position . President George W. Bush appointed Ben Bernanke as his successor. Greenspan came to the Federal Reserve Board from a consulting career. Although he was subdued in his public appearances, favorable media coverage raised his profile to a point that several observers likened him to a "rock star". Democratic leaders of Congress criticized him for politicizing his office because of his support for Social Security privatization and tax cuts.

Other Resources About Alan Greenspan

What Schools Are Affiliated With Alan Greenspan?

Alan Greenspan is affiliated with the following schools:

What Are Alan Greenspan's Academic Contributions?

Alan Greenspan has made the following academic contributions: