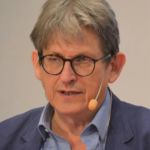 Why Is Alan Rusbridger Influential?

According to Wikipedia, Alan Charles Rusbridger is a British journalist, who was formerly editor-in-chief of The Guardian and then Principal of Lady Margaret Hall, Oxford. Rusbridger became editor-in-chief of The Guardian in 1995, having been a reporter and columnist earlier in his career. Rusbridger stood down from the post at the end of May 2015 and was succeeded by Katharine Viner. In 2014, he was awarded the Right Livelihood Award for "building a global media organisation dedicated to responsible journalism in the public interest, undaunted by the challenges of exposing corporate and government malpractices".

Other Resources About Alan Rusbridger

What Schools Are Affiliated With Alan Rusbridger?

Alan Rusbridger is affiliated with the following schools: