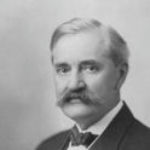 Why Is Albert B. Cummins Influential?

According to Wikipedia, Albert Baird Cummins was an American lawyer and politician. He was the 18th governor of Iowa elected to three consecutive terms and U.S. senator for Iowa serving for 18 years. Early life Cummins was born in a log house in Carmichaels, Pennsylvania, the son of Sarah Baird and Thomas L. Cummins, a carpenter who also farmed. He attended different schools including the Greene Academy at Carmichaels, and was matriculated at Waynesburg College.

Other Resources About Albert B. Cummins

What Schools Are Affiliated With Albert B. Cummins?

Albert B. Cummins is affiliated with the following schools: