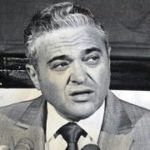 Why Is Albert Seedman Influential?

According to Wikipedia, Albert A. Seedman was an officer with the New York City Police Department for 30 years, known for solving several high-profile cases before resigning as chief of the Detective Bureau. He was the only Jewish officer to ever hold that position. After his retirement he was the chief of security for a New York area department store chain before retiring to South Florida.

Other Resources About Albert Seedman

What Schools Are Affiliated With Albert Seedman?

Albert Seedman is affiliated with the following schools: