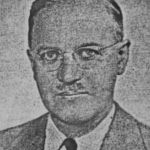 Why Is Albin C. Bro Influential?

According to Wikipedia, Albin Carl Bro was a Christian missionary and educator, United States diplomat, and the fifth president of Shimer College. Early life and education Bro was born in Prentice, Wisconsin, on September 4, 1893. In 1917, he graduated as valedictorian from Northland College with a Bachelor of Arts. He entered into missionary service in China in 1919, working as an educational missionary until 1925, during which time he also served as a school principal. He then served for a year as an instructor at the University of Nanking. According to the United States State Department Register, he subsequently worked as instructor at Northland College from 1927 to 1929, as a field secretary for a religious education association from 1929 to 1931 and a field worker for a pension fund from 1931 to 1932.

Other Resources About Albin C. Bro

What Schools Are Affiliated With Albin C. Bro?

Albin C. Bro is affiliated with the following schools: