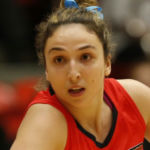 Why Is Alex Ciabattoni Influential?

According to Wikipedia, Alexandra Antonietta Ciabattoni is an Australian professional basketball player for the Perth Lynx of the Women's National Basketball League . Early life Ciabattoni was born and raised in Adelaide, South Australia. She attended Mary MacKillop College in the suburb of Kensington and played basketball in the Central ABL for the Southern Tigers and South Adelaide Panthers between 2010 and 2013.

Other Resources About Alex Ciabattoni

What Schools Are Affiliated With Alex Ciabattoni?

Alex Ciabattoni is affiliated with the following schools: