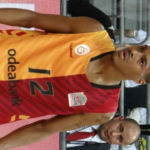 Why Is Alex Renfroe Influential?

According to Wikipedia, Gregory Alexander Renfroe is an American-born Bosnian professional basketball player for San Pablo Burgos of the Liga ACB. College career Renfroe played college basketball at Belmont University. He was named Atlantic Sun Conference Player of the Year in 2009.

Other Resources About Alex Renfroe

What Schools Are Affiliated With Alex Renfroe?

Alex Renfroe is affiliated with the following schools: