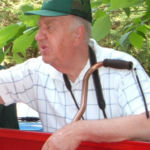 Why Is Alex Shigo Influential?

According to Wikipedia, Alex L. Shigo was a biologist, plant pathologist with the United States Forest Service whose studies of tree decay resulted in many improvements to standard arboricultural practices. He travelled and lectured widely to promote understanding of tree biology among arborists and foresters. His large body of primary research serves as a broad foundation for further research in tree biology.

Other Resources About Alex Shigo

What Schools Are Affiliated With Alex Shigo?

Alex Shigo is affiliated with the following schools: