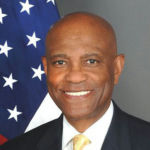 Why Is Alfonso E. Lenhardt Influential?

According to Wikipedia, Alfonso E. Lenhardt represented the United States as Ambassador to Tanzania from 2009 to 2013. He was also accredited as the US representative to the East African Community in 2010. He left his post in October 2013. From 2001 to 2003, he served as Sergeant at Arms of the United States Senate. From 1965 to 1997, he had a distinguished military career in the U.S. Army, with multiple assignments to various parts of the world, retiring as a highly decorated Major General.

Other Resources About Alfonso E. Lenhardt

What Schools Are Affiliated With Alfonso E. Lenhardt?

Alfonso E. Lenhardt is affiliated with the following schools: