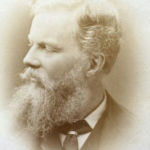 Why Is Alfred Waterhouse Influential?

According to Wikipedia, Alfred Waterhouse was an English architect, particularly associated with the Victorian Gothic Revival architecture, although he designed using other architectural styles as well. He is perhaps best known for his designs for Manchester Town Hall and the Natural History Museum in London, although he also built a wide variety of other buildings throughout the country. Besides his most famous public buildings he designed other town halls, the Manchester Assize buildings—bombed in World War II—and the adjacent Strangeways Prison. He also designed several hospitals, the most architecturally interesting being the Royal Infirmary Liverpool and University College Hospital London. He was particularly active in designing buildings for universities, including both Oxford and Cambridge but also what became Liverpool, Manchester and Leeds universities. He designed many country houses, the most important being Eaton Hall in Cheshire, largely demolished in 1961-63. He designed several bank buildings and offices for insurance companies, most notably the Prudential Assurance Company. Although not a major church designer he produced several notable churches and chapels. He was both a member of The Royal Institute of British Architects, of which he served a term as President, and a Royal Academician, acting as Treasurer for the Royal Academy.

Other Resources About Alfred Waterhouse

What Schools Are Affiliated With Alfred Waterhouse?

Alfred Waterhouse is affiliated with the following schools: