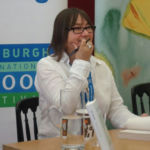 Why Is Ali Smith Influential?

According to Wikipedia, Ali Smith CBE FRSL is a Scottish author, playwright, academic and journalist. Sebastian Barry described her in 2016 as "Scotland's Nobel laureate-in-waiting". Early life and education Smith was born in Inverness on 24 August 1962 to Ann and Donald Smith. Her parents were working-class and she was raised in a council house in Inverness. From 1967 to 1974 she attended St. Joseph's RC Primary school, then went on to Inverness High School, leaving in 1980.

Other Resources About Ali Smith

What Schools Are Affiliated With Ali Smith?

Ali Smith is affiliated with the following schools:

What Are Ali Smith's Academic Contributions?

Ali Smith has made the following academic contributions: