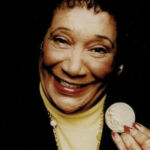 Why Is Alice Coachman Influential?

According to Wikipedia, Alice Marie Coachman Davis was an American athlete. She specialized in high jump and was the first black woman to win an Olympic gold medal. Biography Early life and education Alice Coachman was born on November 9, 1923, in Albany, Georgia. She was the fifth of Fred and Evelyn Coachman's ten children. Coachman was unable to access athletic training facilities or participate in organized sports because of the color of her skin. Added to the list of training barriers was her status as a female athlete during a time of widespread opposition to women in sports. She trained using what was available to her, running shoeless along the dirt roads near her home and using homemade equipment to practice her jumping.

Other Resources About Alice Coachman

What Schools Are Affiliated With Alice Coachman?

Alice Coachman is affiliated with the following schools: