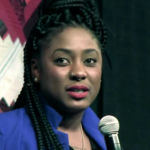 Why Is Alicia Garza Influential?

According to Wikipedia, Alicia Garza is an American civil rights activist and writer known for co-founding the international Black Lives Matter movement. She has organized around the issues of health, student services and rights, rights for domestic workers, ending police brutality, anti-racism, and violence against transgender and gender non-conforming people of color. Her editorial writing has been published by The Guardian, The Nation, Rolling Stone, and Truthout. She currently directs Special Projects at the National Domestic Workers Alliance and is the Principal at the Black Futures Lab.

Other Resources About Alicia Garza

What Schools Are Affiliated With Alicia Garza?

Alicia Garza is affiliated with the following schools: