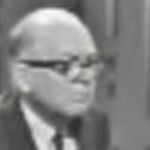 Why Is Allen Saunders Influential?

According to Wikipedia, Allen Saunders was an American writer, journalist and cartoonist who wrote the comic strips Steve Roper and Mike Nomad, Mary Worth and Kerry Drake. He is credited with being the originator of the saying, "Life is what happens to us while we are making other plans" in 1957. The saying was later slightly modified and popularised by John Lennon in the song "Beautiful Boy ".

Other Resources About Allen Saunders

What Schools Are Affiliated With Allen Saunders?

Allen Saunders is affiliated with the following schools: