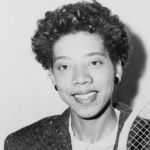 Why Is Althea Gibson Influential?

According to Wikipedia, Althea Neale Gibson was an American tennis player and professional golfer, and one of the first Black athletes to cross the color line of international tennis. In 1956, she became the first African American to win a Grand Slam title . The following year she won both Wimbledon and the US Nationals , then won both again in 1958 and was voted Female Athlete of the Year by the Associated Press in both years. In all, she won 11 Grand Slam tournaments: five singles titles, five doubles titles, and one mixed doubles title. Gibson was inducted into the International Tennis Hall of Fame and the International Women's Sports Hall of Fame. "She is one of the greatest players who ever lived", said Bob Ryland, a tennis contemporary and former coach of Venus and Serena Williams. "Martina [Navratilova] couldn't touch her. I think she'd beat the Williams sisters." In the early 1960s she also became the first Black player to compete on the Women's Professional Golf Tour.

Other Resources About Althea Gibson

What Schools Are Affiliated With Althea Gibson?

Althea Gibson is affiliated with the following schools: