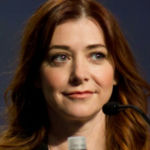 Why Is Alyson Hannigan Influential?

According to Wikipedia, Alyson Lee Hannigan is an American actress and television presenter. She is best known for her roles as Willow Rosenberg in the television series Buffy the Vampire Slayer , as Lily Aldrin in the sitcom How I Met Your Mother for which she won a People's Choice Award in 2009, and as Michelle Flaherty in the American Pie film series . Since 2016, Hannigan has hosted the television show Penn & Teller: Fool Us. She also provides the voice of Claire Clancy in the Disney Junior animated series Fancy Nancy .

Other Resources About Alyson Hannigan

What Schools Are Affiliated With Alyson Hannigan?

Alyson Hannigan is affiliated with the following schools: