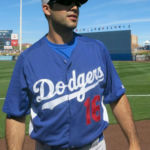 Why Is Andre Ethier Influential?

According to Wikipedia, Andre Everett Ethier is an American former professional baseball outfielder. He played in Major League Baseball for the Los Angeles Dodgers from 2006 to 2017 and is second all-time in post-season appearances as a Dodger with 51.

Other Resources About Andre Ethier

What Schools Are Affiliated With Andre Ethier?

Andre Ethier is affiliated with the following schools: