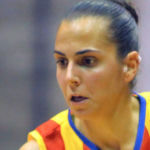 Why Is Andrea Vilaró Influential?

According to Wikipedia, Andrea Vilaró is a Spanish basketball player. She plays as a small forward in the Spanish league for CB Avenida and the Spanish national team.Club career Vilaró started playing with the youth teams of Segle XXI in 2006, reaching the senior team and playing in the Spanish League second tier for the last two seasons. She played for the Florida Gators for the 2011-12 season. From 2012 to 2015 she played for three clubs in the Spanish top tier league: CD Zamarat, CB Ciudad de Burgos and CB Al-Qázeres. She spent the following four seasons, 2015-2019, at Cadí La Seu. On 10 May 2019, she signed for CB Avenida, one of the top teams of the league.

Other Resources About Andrea Vilaró

What Schools Are Affiliated With Andrea Vilaró?

Andrea Vilaró is affiliated with the following schools: