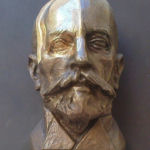 Why Is Andrija Mohorovičić Influential?

According to Wikipedia, Andrija Mohorovičić was a Croatian geophysicist. He is best known for the eponymous Mohorovičić discontinuity and is considered one of the founders of modern seismology. Early years Mohorovičić was born in Volosko, Opatija, where his father , was a blacksmith, making anchors. The younger Andrija also loved the sea and married a captain's daughter, Silvija Vernić. They had four sons. Mohorovičić obtained his elementary education in his home town, then continued at the gymnasium of neighbouring Rijeka. He received his higher education in mathematics and physics at the Faculty of Philosophy in Prague in 1875, where one of his professors was Ernst Mach. At 15, Mohorovičić knew Italian, English and French. Later he learned German, Latin and Ancient Greek.

Other Resources About Andrija Mohorovičić

What Schools Are Affiliated With Andrija Mohorovičić?

Andrija Mohorovičić is affiliated with the following schools: