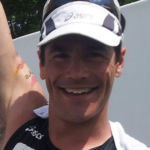 Why Is Andy Potts Influential?

According to Wikipedia, Andrew Robert Potts is a triathlete from the United States. He competed in triathlon at the 2004 Summer Olympics and is the 2007 Ironman 70.3 World Champion. Prior to triathlon, Potts was a swimmer where he won the bronze medal in the men's 400m individual medley at the 1995 Summer Universiade and earned a spot on the USA Swimming national team where he would place fourth at the 1996 Olympic Trials in the 400 IM.

Other Resources About Andy Potts

What Schools Are Affiliated With Andy Potts?

Andy Potts is affiliated with the following schools: