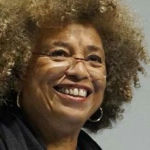 Why Is Angela Davis Influential?

According to Wikipedia, Angela Yvonne Davis is an American political activist, philosopher, academic, scholar, and author. She is a professor at the University of California, Santa Cruz. A Marxist, Davis was a longtime member of the Communist Party USA and is a founding member of the Committees of Correspondence for Democracy and Socialism . She is the author of over ten books on class, feminism, race, and the US prison system.

Other Resources About Angela Davis

What Schools Are Affiliated With Angela Davis?

Angela Davis is affiliated with the following schools: