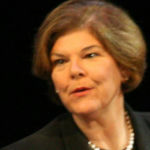 Why Is Ann Compton Influential?

According to Wikipedia, Ann Compton is an American former news reporter and White House correspondent for ABC News Radio. Career highlights Ann Compton graduated from New Trier High School in Winnetka, Illinois, in 1965. She began her broadcasting career in Virginia, where an internship during her junior year at Hollins College led to a full-time job as the first woman reporting for WDBJ TV, a CBS affiliate in Roanoke. She established a State Capitol Bureau in Richmond for the station. In 1973, ABC News hired her and she reported from New York City until December 1974, when she was assigned to the White House.

Other Resources About Ann Compton

What Schools Are Affiliated With Ann Compton?

Ann Compton is affiliated with the following schools: