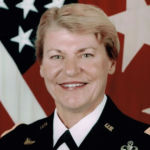 Why Is Ann E. Dunwoody Influential?

According to Wikipedia, Ann Elizabeth Dunwoody is a retired general of the United States Army. She was the first woman in United States military and uniformed service history to achieve a four-star officer rank, receiving her fourth star on November 14, 2008.

Other Resources About Ann E. Dunwoody

What Schools Are Affiliated With Ann E. Dunwoody?

Ann E. Dunwoody is affiliated with the following schools: