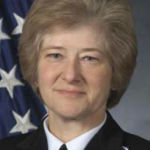 Why Is Ann E. Rondeau Influential?

According to Wikipedia, Ann Elisabeth Rondeau is a retired United States Navy vice admiral. During her tenure in the navy, she received two Defense Distinguished Service Medals, the Navy Distinguished Service Medal, and four Legion of Merit awards. Rondeau was the president of National Defense University and, after serving as the president of the College of DuPage, was chosen by United States Secretary of the Navy Richard V. Spencer to be president of the Naval Postgraduate School in 2019.

Other Resources About Ann E. Rondeau

What Schools Are Affiliated With Ann E. Rondeau?

Ann E. Rondeau is affiliated with the following schools: