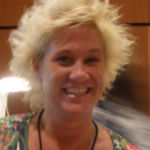 Why Is Anne Burrell Influential?

According to Wikipedia, Anne W. Burrell is an American chef, television personality, and former instructor at the Institute of Culinary Education. She is the host of the Food Network show Secrets of a Restaurant Chef and co-host of Worst Cooks in America. She was also one of the Iron Chefs, Mario Batali's sous chefs in the Iron Chef America series and appears on other programs on the network such as The Best Thing I Ever Ate. She was a contestant on the fourth season of The Food Network competition show, The Next Iron Chef Super Chefs being eliminated in episode 6. She was also a contestant on the first season of Chopped All-Stars Tournament, winning the "Food Network Personalities" preliminary round to advance to the final round, where she placed second runner up to Nate Appleman and Aarón Sanchez. In 2015, Burrell won the fourth installment of the Chopped All-Stars tournament winning $75,000 for the Juvenile Diabetes Research Foundation. She also hosted the series Chef Wanted with Anne Burrell in 2012–2013.

Other Resources About Anne Burrell

What Schools Are Affiliated With Anne Burrell?

Anne Burrell is affiliated with the following schools: