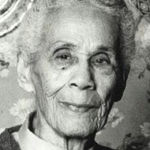 Why Is Annie Elizabeth Delany Influential?

According to Wikipedia, Annie Elizabeth "Bessie" Delany was an American civil rights pioneer who was the subject, along with her elder sister Sarah "Sadie" Delany, of The New York Times bestselling oral history, Having Our Say: The Delany Sisters' First 100 Years, written by journalist Amy Hill Hearth. Delany earned a Doctor of Dental Surgery degree from Columbia University in 1923. She was the second black woman licensed to practice dentistry in New York State, and became famous, with the publication of the book, when she was aged 101.

Other Resources About Annie Elizabeth Delany

What Schools Are Affiliated With Annie Elizabeth Delany?

Annie Elizabeth Delany is affiliated with the following schools: