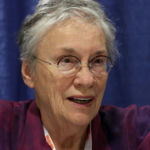 Why Is Annie Proulx Influential?

According to Wikipedia, Edna Ann Proulx is an American novelist, short story writer, and journalist. She has written most frequently as Annie Proulx but has also used the names E. Annie Proulx and E.A. Proulx. She won the PEN/Faulkner Award for Fiction for her first novel, Postcards. Her second novel, The Shipping News , won both the Pulitzer Prize for Fiction and the U.S. National Book Award for Fiction and was adapted as a 2001 film of the same name. Her short story "Brokeback Mountain" was adapted as an Academy Award, BAFTA and Golden Globe Award-winning motion picture released in 2005.

Other Resources About Annie Proulx

What Schools Are Affiliated With Annie Proulx?

Annie Proulx is affiliated with the following schools:

What Are Annie Proulx's Academic Contributions?

Annie Proulx has made the following academic contributions: