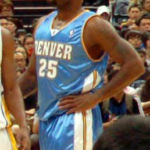 Why Is Anthony Carter Influential?

According to Wikipedia, Anthony Bernard Carter is an American basketball coach and former player who is an assistant coach for the Miami Heat. He played college basketball for Saddleback College and Hawaii. Early life Born in Milwaukee, Carter played as a freshman on the varsity team of Alonzo A. Crim High School in Atlanta. However, after his freshman year, Carter quit high school. After leaving school, Carter spent his teenage years playing basketball for money in Atlanta. The Rocky Mountain News quoted Carter stating: "The dope man would put up the money, and we would play. We used to play for the drug dealers. That's how we were going to make our money. We didn't sell the drugs ... to buy shoes and food. That was the only way we could eat." During his teenage years, Carter's mother was on drugs, and all seven of his uncles were at one point in prison.

Other Resources About Anthony Carter

What Schools Are Affiliated With Anthony Carter ?

Anthony Carter is affiliated with the following schools: