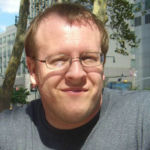 Why Is Anton Strout Influential?

According to Wikipedia, Anton Strout was an American urban fantasy author, blogger, and podcaster. Personal life Anton Strout was born January 24, 1970, in the Berkshires. He was raised in Dalton, Massachusetts, and graduated from Wahconah Regional High School in Massachusetts before majoring in English/Communications and Theater at Massachusetts College of Liberal Arts, from which he graduated in 1993.

Other Resources About Anton Strout

What Schools Are Affiliated With Anton Strout?

Anton Strout is affiliated with the following schools: