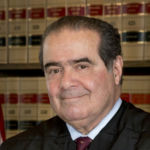 Former Associate Justice of the Supreme Court of the United States

Why Is Antonin Scalia Influential?

According to Wikipedia, Antonin Gregory Scalia was an American jurist who served as an associate justice of the Supreme Court of the United States from 1986 until his death in 2016. He was described as the intellectual anchor for the originalist and textualist position in the Court's conservative wing. For catalyzing an originalist and textualist movement in American law, he has been described as one of the most influential jurists of the twentieth century, and one of the most important justices in the Supreme Court's history. Scalia was posthumously awarded the Presidential Medal of Freedom in 2018 by President Donald Trump, and the Antonin Scalia Law School at George Mason University was named in his honor.

Other Resources About Antonin Scalia

What Schools Are Affiliated With Antonin Scalia?

Antonin Scalia is affiliated with the following schools: