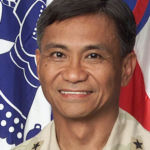 Why Is Antonio Taguba Influential?

According to Wikipedia, Antonio Mario Taguba is a retired major general in the United States Army. He was the second American citizen of Philippine birth to be promoted to general officer rank in the United States Army. Taguba is best known for authoring the Taguba Report, an internal United States Army report on abuse of detainees held at Abu Ghraib prison in Iraq. The report was leaked, then published, in 2004. Taguba again made national headlines in June 2008 when he accused the Bush administration of committing war crimes in a preface to a report by Physicians for Human Rights on prisoner abuse and torture in American military prisons.

Other Resources About Antonio Taguba

What Schools Are Affiliated With Antonio Taguba?

Antonio Taguba is affiliated with the following schools: