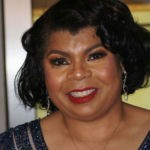 Why Is April Ryan Influential?

According to Wikipedia, April Danielle Ryan is an American reporter, author, and White House Correspondent for The Grio. From January 1997 to November 2020 Ryan served as a White House correspondent and Washington, D.C., bureau chief for American Urban Radio Networks. In 2017, she joined CNN as a political analyst. In May 2017, the National Association of Black Journalists named Ryan as the "Journalist of the Year".

Other Resources About April Ryan

What Schools Are Affiliated With April Ryan?

April Ryan is affiliated with the following schools: