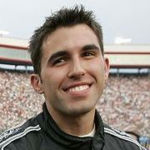 Why Is Aric Almirola Influential?

According to Wikipedia, Aric Michael Almirola is an American professional stock car racing driver. He competes full-time in the NASCAR Cup Series, driving the No. 10 Ford Mustang for Stewart-Haas Racing. A graduate of Hillsborough High School in Tampa, Almirola attended the University of Central Florida to work on a degree in mechanical engineering before leaving to pursue a career in racing.

Other Resources About Aric Almirola

What Schools Are Affiliated With Aric Almirola?

Aric Almirola is affiliated with the following schools: