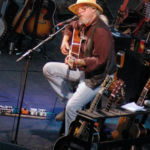 Why Is Arlo Guthrie Influential?

According to Wikipedia, Arlo Davy Guthrie is an American retired folk singer-songwriter. He is known for singing songs of protest against social injustice, and storytelling while performing songs, following the tradition of his father Woody Guthrie. Guthrie's best-known work is his debut piece, "Alice's Restaurant Massacree", a satirical talking blues song about 18 minutes in length that has since become a Thanksgiving anthem. His only top-40 hit was a cover of Steve Goodman's "City of New Orleans". His song "Massachusetts" was named the official folk song of the state, in which he has lived most of his adult life. Guthrie has also made several acting appearances. He is the father of four children, who have also had careers as musicians.

Other Resources About Arlo Guthrie

What Schools Are Affiliated With Arlo Guthrie?

Arlo Guthrie is affiliated with the following schools: